Camera Shots are components that provide the Camera Controller (or Main Camera) information about how they should move and behave.

Think of Shots as a collecion of camera angles scattered around the scene, each trying to frame the action as best as possible. Then you, the Director, decide which camera is visualized on the screen, for how long and when to swap to another shot.

To create a Camera Shot right click on the Hierarchy panel and select Game Creator → Cameras → Shot Camera from the dropdown menu. This will place a new game object on the scene with the Camera Shot attached to it.

If your scene doesn't have a Main Camera attached to the scene camera, creating a new Camera Shot will create one for you and link it to the newly created shot automatically for you. 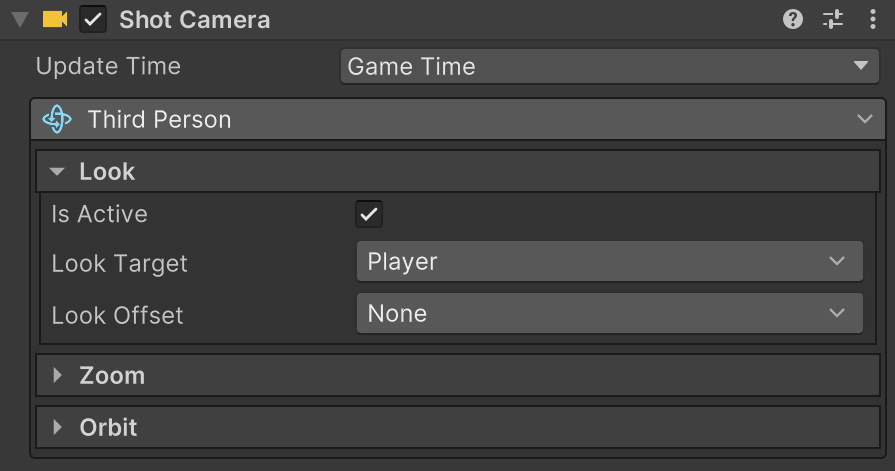 A Camera Shot component contains its shot type and a collection of parameters that can be modified to fine-tune its behavior. In the example above, the Third Person camera shot has 3 sections that allow to modify the target tracked, whether the user should be able to zoom in/out and how the orbit should be done. Clicking on each of these sections reveals or hides its content.

Since version 2.3.15 all Camera Shots have a toggle field called Is Main Shot.

Ticking this will allow to define it as the primary one, which can be used as a shortcut when selecting the Main Camera Shot field drop a camera selection dropdown.

To change a camera shot type, simply click on its type name. A dropdown menu will appear from which the new type can be selected. 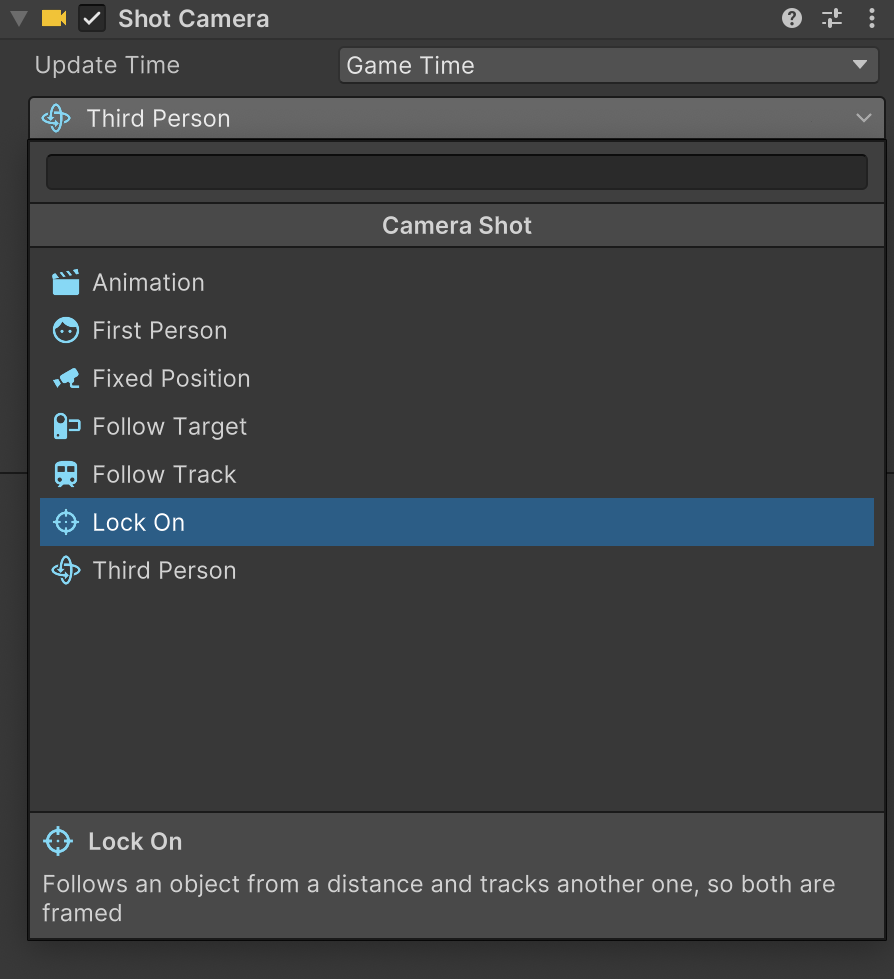 This camera shot doesn't move from its place. However, it can be instructed to keep track of a target's position by pivoting around itself. Think of this camera's behavior as a security camera.

This camera is very similar to the Fixed Position but also allows to follow the target from a certain distance. Useful for top-down view games like Diablo.

This camera shot allows to track a target as well as move along a pre-defined rail-like path. This path's position is defined by the position of the targeted object along another path. This camera shot is useful for games that have very linear corridors but want to smoothly turn the camera around corners.

This camera shot moves along a pre-defined path over a certain amount of time. When it reaches the end of the animation, it stops there and does nothing else. This shot is very useful for cinematic sequences where multiple animation shots can be chained together to dynamically follow the action.

This shot is perfect for first person games. The target object (usually a humanoid) determines the position of the shot and follows it while allowing to spin the head around.

Comes with a vast collection of features such as:

All these parameters can be changed at runtime to accomodate to different situations, such as increasing the noise after sprinting and such.

This shot is used on third person games where the camera follows a target but the user is free to orbit around it.

This shot allows to follow a target's position while the rotation follows another one, always framing both targets on screen. This shot is perfect for locking on enemies when making an action game or hinting the player something they should not be missing.

This shot anchors itself to the chosen game object and allows to pan and tilt the camera vertically and horizontally, up to a certain amount. The restitute field brings back the shot to the center if no further input is detected. This is specially useful when using a gamepad controller and you want the character to peek around corners.