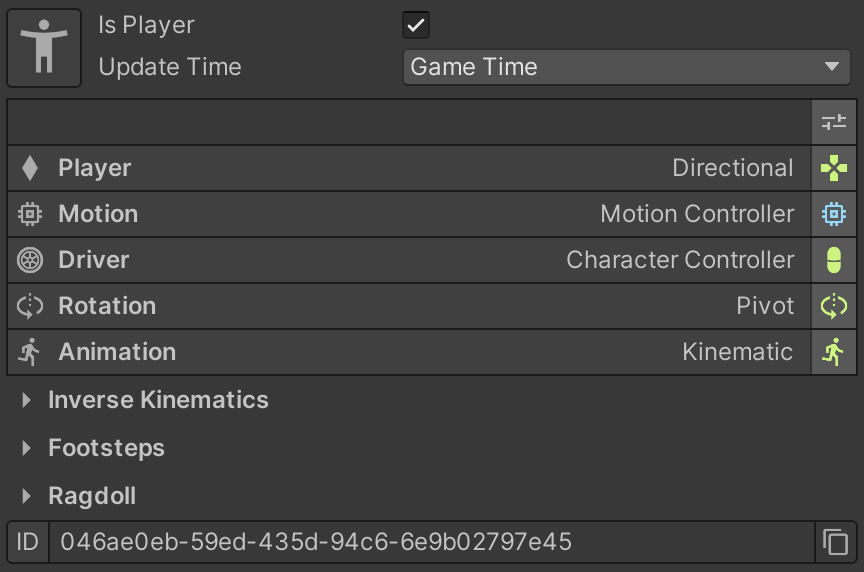 This block includes the big mannequin icon and two fields:

By default all characters should use the game's clock. Setting the game's time scale to zero will freeze the game, which is useful for pausing it. However if your game has a mechanic where a character ignores the time scale, you can use the unscaled real-life clock.

The mannequin icon isn't just an aesthetic ico, but a debugging tool. When the game is running, the icon will change into a green colored one and will turneach of its limbs red every time the character performs a blocking action that prevents that limb from doing something else. For example, performing a jump makes the legs be busy for a little less than a second, as well as landing.

The mannequin icon will change into a red skull when the character is considered dead.

This block is the most important one. A Character behavior is divided into 5 main categories (known as Units) and each one can be changed individually without affecting the rest.

This settigs block is called the Kernel of the character and each individual row is called a Control Unit or Unit for short.

To change each type of Unit click on the right-most icon of each and choose the implementation you want. Clicking on the name of the Unit will expand/collapse its available options.

Game Creator comes with a collection of Units so you can customize how you want your characters to work. However, these lists are not fixed and can be extended via code. As Game Creator grows, so will the amount of options available. If you are a programmer you can create Unit that integrates a third-party character system. To know more about extending the Character component see the Character Controller section.

The Player unit controls how the character is controlled by the user. It only affects the character if its Is Player checkbox is enabled. Game Creator comes with a bunch of different Player units the user can choose from:

The Motion unit defines a character's properties and what it can or can't do. It comes with a list of options that can be modified both in the editor and at runtime.

Game Creator comes with just a single Motion unit called Motion Controller. Unless the character is implementing a custom character controller, the Motion unit shouldn't be changed to anything else. 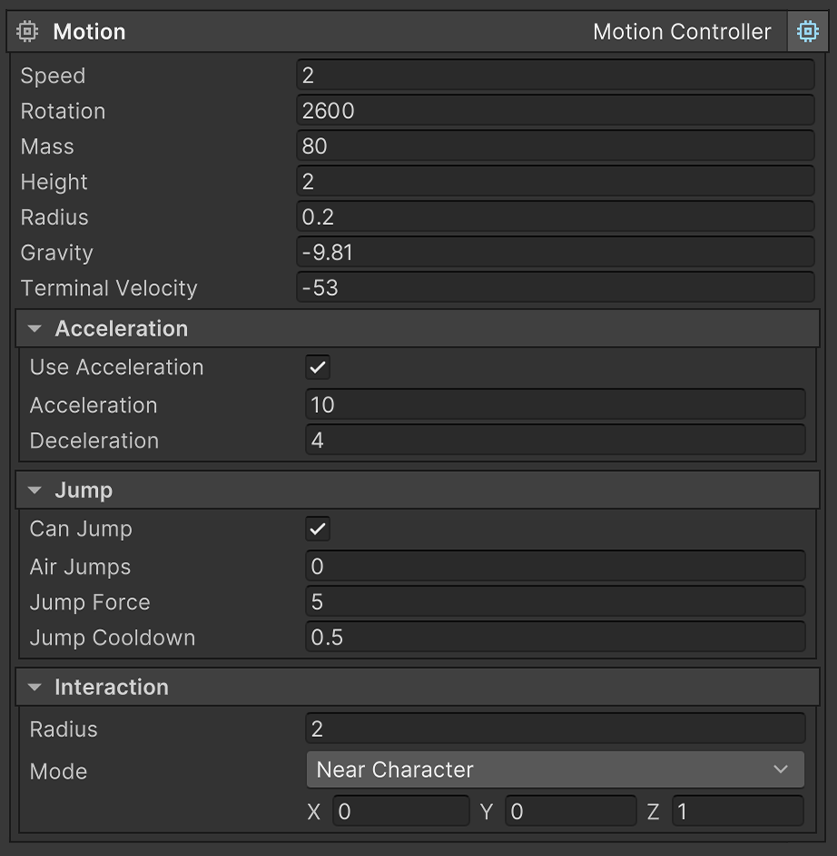 The Motion unit also has the Interaction section at the bottom, which allows to configure how the character can interact with elements from the scene.

The Driver unit is responsible for translating the math of the processed motion data into actual movement. Depending on the controller type the character will move slightly different.

The Rotation handles how the character rotates and its facing direction at any time. There are multiple Units available by default although the most common one is the Pivot.

It's important to highlight the fact that these options can be changed at runtime. For example, the player can use the Pivot unit when wandering the world but switch to a Look at Target unit when encountering an enemy. The character will seamlessly transition between them.

The Animation unit controls how the character model moves as a reaction of any internal or external stimulus and also manages the representation of the character's 2D or 3D model. 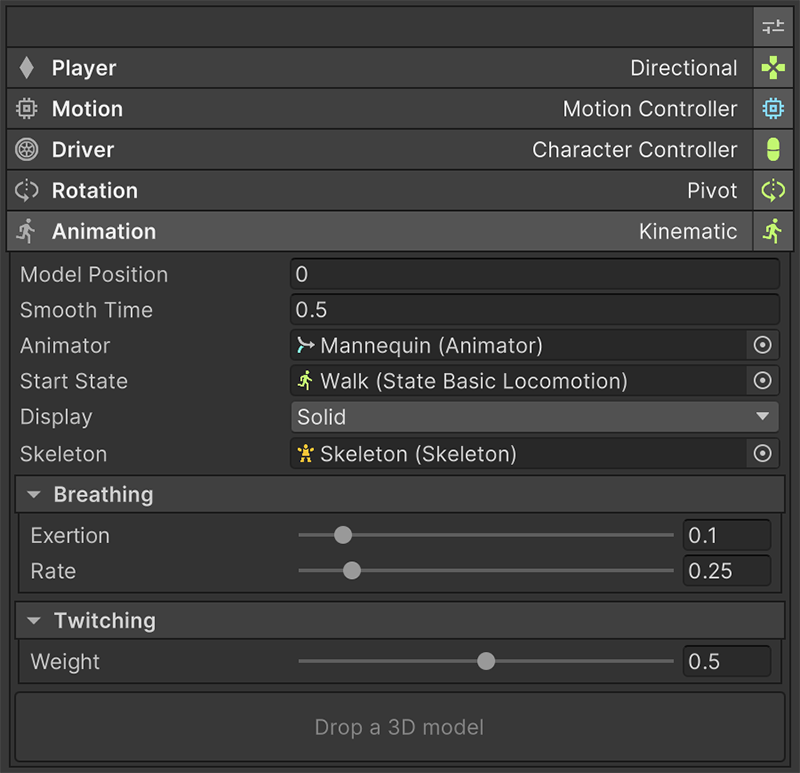 Just like the Motion unit, there is one single Animation unit option available called Kinematic which controls any generic character model's animations. There are different configuration blocks within the Kinematic animation unit:

The Character component has 3 extra sections at the bottom of the component which allow to control more specific parts of the character.

Inverse Kinematics (IK for short) allow characters to change their bone rotations in order to transform the overall structure and reach with the tip a targeted position and rotation. A common use of Inverse Kinematics is making sure the character correctly align their feet to the steepness of the terrain.

Game Creator allows to dynamically add or remove new IK systems onto each character individually and are processed from top to bottom. To add a new IK system simply click onto the "Add IK Rig Layer" button and select the option you want from the list.

You can also create your own custom IK systems. Check out the Custom IK section for more information.

The Character component comes with some common IK systems used on most games:

The Footstep system allows the character to signal when it has performed a step. This is useful when you want a character to leave a trail of footprints, play some particle effects simulating the dust of each step or playing a sound effect.

The Footstep system doesn't require the character model to be humanoid. It uses an array of objects that identify the character's feet bones. By default it assumes the character is a human and has two feet, but this can be easily customized clicking on the "Add Foot" button.

The Footstep Sounds does not play the raw step sound effect but automatically distorts it in order for the player to hear different slightly different sounds each time. It also changes the pitch of the sound if there are multiple layers of textures, muffling those that are less prominent.

The Character component comes with a built-in Ragdoll physics system that allows to quickly turn any character into an inanimate object that reacts to physics with a set of constraints on each of its limbs.

The Ragdoll system uses the Skeleton configuration asset to determine which parts of the model correspond to which bone. It can't work without one.

Give plenty of transition time

It is recommended to use large transition values, above 0.5 seconds. The character's limbs can be in very awkward positions that doesn't match the initial pose of the recovery animation clip; so having small transitions will make the character appear to snap into an animation, instead of smoothly blending into it.