A Ragdoll system lets characters react to physics and external forces without any direct input from itself. This is commonly used for enemies that have been defeated or when the player falls unconscious due to a strong attack or a big fall.

A Character requires a Skeleton definition asset in order to correctly identify the size of each of its bones and how they form the joint connection chain.

Defining all Skeleton volumes and how these relate to their parent bones is tedious and time consuming process. Luckily Game Creator makes it very easy to automatically generate a humanoid Ragdoll asset. With the Skeleton asset selected, drag and drop any Humanoid 3D model onto the bottom drop-zone and it will generate the structure for you. You can then tweak the values to perfectly match your model.

To initiate a ragdoll state, simply use the Instruction Start Ragdoll and select the targeted character. Notice that the player's input will still be in effect though. This is why Game Creator's default character comes with 2 Triggers that make it even easier to handle Ragdolls: When a character is considered to be dead it will automatically trigger the Start Ragdoll instruction on the character. When a character is revived, it will also automatically handle playing the correct animation and get the character up from the floor.

This means that, in order to start and stop the ragdoll effects, all that needs to be done is to use the Instruction Kill Character to disable any interactions from a character and it will automatically enter ragdoll-mode. On the other hand, using the Revive Character Instruction will give back control to the character and get it up from the floor using the correct animation.

The character will automatically handle transitioning from its ragdoll pose to the default idle animation and pick up the most suitable gesture, depending on whether its currently facing down or up.

To setup the getting up animations, select the Character and drag and drop the desired animations onto the Recover Face Down and Recover Face Up clip fields. 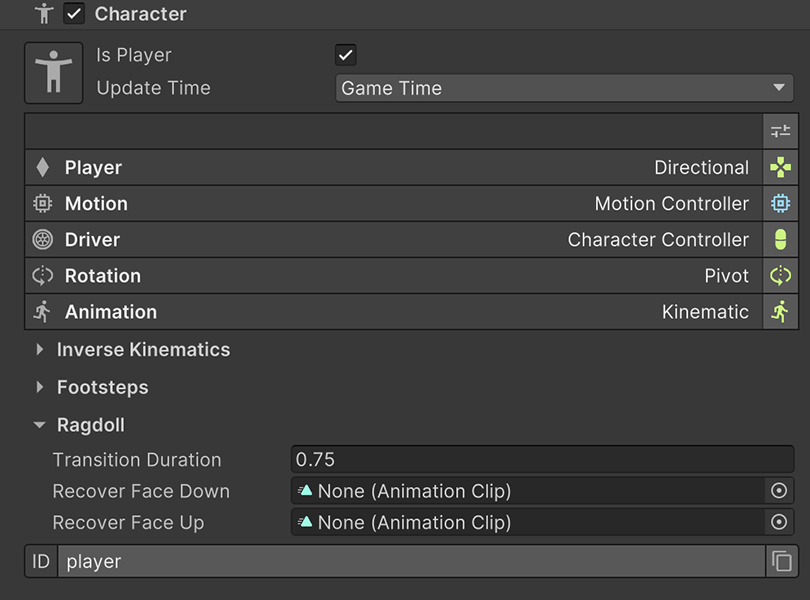 The Transition Duration field allows to specify the duration between the time the character is not controllable due to being in ragdoll-mode and recovered. Ideally this value will be a few milliseconds shorter than both recover animations.

The most important part of a ragdoll is knowing the length and size of each of its physical bones and how they interact with the rest of the body. This is done using the Skeleton asset file. To know more about configuring a Skeleton asset and associate it with a Character, see the Skeleton section.