Classes are objects that represent a type of character or object with RPG traits, and contains a list of Stats and Attributes.

Classes in an RPG

Just like in most RPGs, a Class defines a type character with different values. For example, a Mage will have the same Stats and Attributes as a Knight, but their values and progression may differ, making the Mage grow his magic abilities at a much higher rate than the Knight, which focuses on its physical ones.

To create a Class asset, right click on the Project panel folder you want to create it and select Create → Game Creator → Stats → Class.

By default, a Class has an empty list of fields. The image below represents a Class filled with a collection of Stats and Attributes. 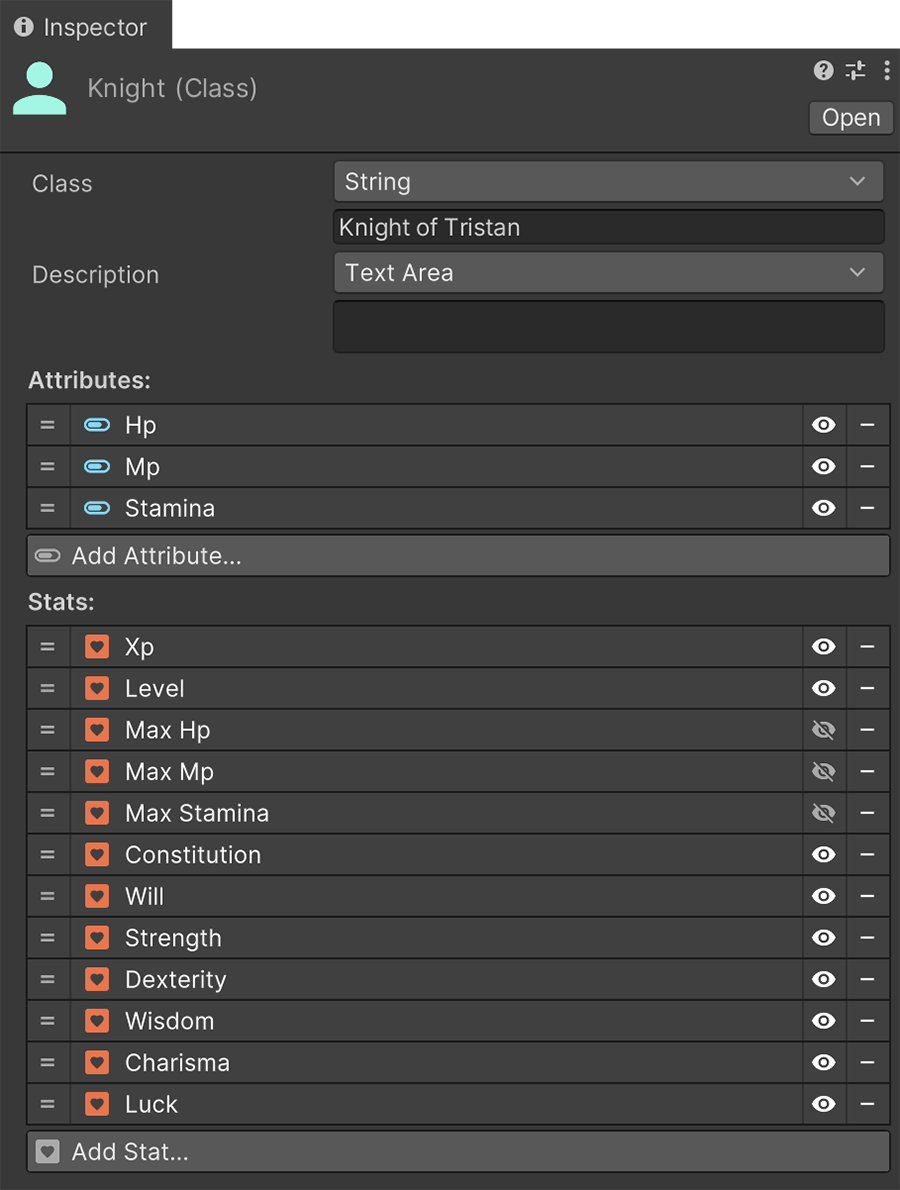 The eye icon that appears next to all Attributes and Stats is a button that can be toggled. It has no impact on the game whatsoever. Instead it hides the option from the Traits component. This is useful if you have hundreds of Stats and Attributes and want to keep the important ones at a glance.

The Class and Description fields are used to display information about the current class in the game's user interface.

The Attributes list defines all the attributes linked to this particular class.

To add a new Attribute, click on the "Add Attribute" button at the bottom and pick (or drag and drop) the desired Attribute asset.

In this section, the selcted Attribute's starting percent can be overriden, in case a particular Class has a different starting value than another.

The Stats list defines all the stats linked to this particular class, including the ones that define the max cap of Attributes.

To add a new Stat, click on the "Add Stat" button at the bottom and pick (or drag and drop) the desired Stat asset.

In this section, the selected Stat base value and formula can be overriden.

Override Stat Base and Formula

When creating multiple RPG classes, such as Mages, Knights and Archers, it's a good practice to have the same Attributes and Stats. In order to change their progression rates, their values can be overriden within the Class asset itself.

For example, the wisdom base stat value may have a much higher one in a Mage class than in a Knight.